“Steve’s passing one year ago today was a sad and difficult time for all of us.  I hope that today everyone will reflect on his extraordinary life and the many ways he made the world a better place.

One of the greatest gifts Steve gave to the world is Apple.  No company has ever inspired such creativity or set such high standards for itself.  Our values originated from Steve and his spirit will forever be the foundation of Apple.  We share the great privilege and responsibility of carrying his legacy into the future.”  Tim Cook, Apple CEO, October 5, 2012

Somehow, it seemed fitting that I follow yesterday’s post about discovering ‘who’ someone is through an obituary notice, with a story about 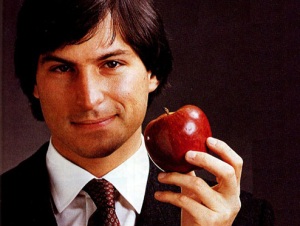 Steve Jobs, who passed one year ago.  Actually it was a year last Friday, October 5.

I was shocked when I turned my computer on, this past Friday morning, and clicked on Safari.  The website homepage I was looking at was totally blank, with the exception of an empty video screen. Within seconds a wonderful, short memorial film about Steve Jobs started to play.  A message from Tim Cook, the current Apple CEO followed the video tribute.  You can read part of it, at the top of this post.

A year!  It doesn’t seem possible.  And yet it is.  And I was just as shocked a year ago to hear that he had died.  Strangely enough, I found out the same way.  By turning on my computer.  My Apple computer.  Clicking on Safari, and seeing the message, and the tributes on the homepage.

Although why I was shocked, I don’t know.

We all knew how very sick he was.  There were all the news stories, the latest sabbatical which, for the first time ever, didn’t promise a return-to-work date; and then, there were the images of him.  We watched him deteriorate before our very eyes, getting thinner and thinner and thinner.  More and more gaunt.  But still, for some inexplicable reason, we were all still surprised.  Horrified.  Devastated.  In disbelief.

Such was the impact that Steve Jobs made on all our lives.

We knew all along that he wasn’t perfect.  But since he’s died a lot has been revealed, we didn’t know.  Probably because of the book that Walter Isaacson has written about him, at his request.  With explicit instructions to be honest, to hide nothing and, in fact, to interview everyone including his enemies.

He wasn’t just arrogant and mean.  He was mean-spirited, unfair, verbally abusive, often belligerent, sometimes disingenuous, demanding, cruel, nasty, self-absorbed and rude.  Yet we love him.  Still, to this day.  But he was also brilliant.  Creative, innovative, inspiring, inspired, driven, determined, committed, uncompromising, passionate and a visionary.  And we idolize him.  Still, to this day.

Speaking strictly for myself my one, and only, career disappointment, is that I never got to work on the Apple account.  To work on their ad campaigns.  Honestly, I think I would have done it for free.  For me, Apple is the greatest brand in the world.  And Steve Jobs was the greatest brand steward that ever lived.  In truth, I think their advertising has suffered since he’s gone.  The campaigns for both the new iPad and the iPhone 5 are nowhere close to as good as what we’d come to expect in the past.  And that makes me very sad.

As for the products, what do I know?  If Steve Jobs were alive, would iPhone 5 be a more revolutionary product than it is?  We’ll never know, will we?  All I know is this:  I love every Apple product I currently have, and have ever had.  The iPods.  The iPads.  The iPhones.  The laptops.  Each and every one of them.

Is it sustainable without him?  I sure as hell hope so!  Because I can’t live without an Apple a day …