In yesterday’s post (addendum) I mentioned that I had originally wanted to be an art director, not a writer.  My mother used to tell me I never stopped 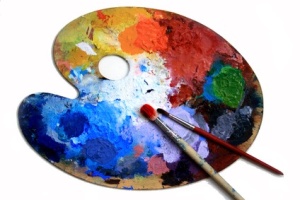 drawing.  She always said that all my school notebooks were covered with doodles, from first grade through to the day I graduated from high school.

My grandmother had two drawers in a chest in her den, that were reserved for endless pieces of paper; and all my coloured pencils.  My father’s younger brother was in the stationery business; and once a week, like clockwork, he dropped by to bring me a fresh supply of paper.  I went through reams and reams of it.

As a child I went to art classes at the Montreal Museum of Fine Art; and my favourite subjects in school were art and English.  Always.  At the summer camp I went to, we put on a major production each year.  A play, usually one that had been on Broadway, and we worked on it practically all summer.  While most of the campers were vying for the starring role, all I wanted to do was work on the sets.  Which I always did.

Once, when I was about eleven years old, I told my aunt that I wanted to change my name.  I told her that Frances (my given name) was boring, not interesting enough to sign on a canvas.  Presuming, of course, that I’d ever paint something that would have been worth signing.  But at that age, who thinks negatively?

So it wasn’t a huge surprise when I told my parents I wanted to be an ad agency art director.  I did go to art college, and loved it.  While I did pretty well in everything, my two best classes were advertising and fashion illustration.

There were two fashion illustrators at the time, in Montreal, who were mega stars; and I absolutely adored their work.  So much so, I saved it.  My parents knew that the newspaper could not be thrown out until I’d clipped the back page.  Eventually my mother made me let her get rid of them, but by then the stack reached almost five feet up the storage room wall.

Georgine Strathy and Eugenie Groh worked for Eaton’s which, at the time, was a leading department store in Canada.  Like Saks Fifth Avenue or Lord and Taylor.  On top of being great retailers, the Eaton family were also terrific marketers.  As part of their advertising campaign, they owned the back page of the daily newspaper.  Everyday they ran a spectacular, full page ad, very often in full colour, illustrated by either Georgina or Eugenie.  Their work is admired to this day.  And that campaign is legendary.

Their work was larger than life.  Imaginative.  Bold.  Really ahead of its time (you could run it now).  Complete fantasy.  And completely unique.  I was reminded of them on Friday night, when I went to see the documentary about Diana Vreeland.  She would have loved their work.  She probably did know who they were.  There was a lot of similarity between their ‘style’ and Vreeland’s.

You can see it when you compare those Eaton’s ads with the editorial pages of both Harper’s Bazaar and Vogue when she was editor.  And you can even see it in the exhibits she master minded when she was a consultant to the Costume Institute of the Metropolitan Museum of Art.

Anyway, they were my idols.  I would have given anything to meet them, and to work with them.  And, believe it or not, I did.  By the time I was ‘all grown up’ and working in the fashion industry, they were no longer working with Eaton’s.  And I hired them to illustrate monthly ‘trend’ newsletters for me.  It was one of the greatest thrills of my life.

So now, maybe, you’re beginning to wonder how I ended up writing.

Well, for some reason, in art college I always wrote copy for the layouts we did in my advertising class.  I don’t know why, really, because we didn’t have to.  It was just instinctive.  When I graduated and started looking for a job, on my second interview the Creative Director I was seeing asked me who’d written the copy.  I told him I had, and he asked if I’d given any thought to becoming a writer.

I hadn’t.  But when he told me there was just one female art director working in Montreal, while there were more opportunities for women writers, I knew I had two choices.  I could give in to my militant leanings, dig my heels in and fight for the cause.  Or I could get a job and earn some money.

When the Creative Director at the next agency I visited asked me what I wanted to do, my answer was “copywriter”.  He hired me.  Not as a writer, but as a ‘go-fer’.  Go for coffee.  Go for cigarettes.  Go for lunch.  I was an assistant.  But one with ‘perks’, because I did get some opportunities to write some copy, or letraset some headlines.  And sit in on brainstorming sessions.  I was in heaven.  I was working in the creative department of an ad agency.  It took me a few years but eventually, after I paid enough dues, I finally got my first writer’s job.

The way I look at it, I still paint pictures.  I just do it with words.