I’ve written so many posts about cats, I’m wondering if, perhaps, you think that I don’t like dogs.  So I decided I’d set the record straight. 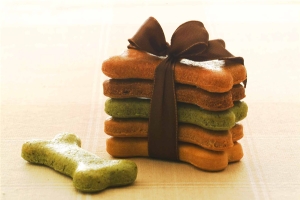 Considering that today is “D”-day, this seems like the perfect time to tell you about my much-loved pooch, Tosca.

When I was four years old my mother had an ectopic pregnancy.  As a result of some damage to her remaining fallopian tube, she was unable to have more children.  My mom and dad, who were wonderful parents, had always wanted more than one child.  So thinking they might adopt, they asked me if I’d like a brother or a sister.  I told them I wanted a dog.

In the end, I remained an only child.  And it took three more years, until I was seven, to convince my mother to let me have a pet.  She knew, although both my dad and I both promised to take care of it, that she’d end up doing all the work.  It’s usually what happens.  But despite any misgivings she may have had, the search for the perfect buddy for me, began.  Guilt works.

After doing a lot of research, without the benefit of Google I might add, we settled on a poodle.  They don’t shed, they’re intelligent, good tempered, calm, quiet and friendly.  My mother got a referral to a good breeder, from a groomer she found, and calls were made.  Before committing to giving us one of her dogs, she insisted on visiting us, in our house.  She wanted to make sure the animal would be going to a good home.  Good for her.  I wish there were more breeders like her.

Once we passed the test, she told us about a puppy she thought would be the right choice for us.  His grandfather, a white toy poodle, was the international champion, Wilber White Swan.  Our puppy, who was bred as a toy, turned out to be a miniature; and instead of being white, he was apricot.  Because of these ‘imperfections’ he could never be a show dog.  But he’d be a great addition to our family.

She showed us pictures and we fell in love.  He was a small ball of apricot-coloured fluff.  Like a softly-tinted, over-sized cotton ball.  We had to have him.  But first, we had to name him, so all the paperwork could be done.

My aunt, who was an opera buff, suggested Toscanini (the Italian conductor, who was one of the most acclaimed musicians of the late 19th and 20th century) as a first name.  My mother thought of Honeycloud (because that’s what he looked like), as his middle name.  His last name, obviously, was Weinstein.  Toscanini Honeycloud Weinstein he was.  A very big name, for such a tiny dog, but so worthy of his lineage.

We just called him Tosca.

True to my word (and my mother’s insistence), I did walk him when I came home from school, and I played with him all the time.  My father walked him, maybe three times.  But my mother walked him first thing in the morning, at lunchtime and before bed.  He was my mother’s dog.  As predicted.  He loved my father and me, but he absolutely adored her.  Wherever in the house she went, he went.  He was constantly by her side.  After dinner, when we settled down to watch TV, he’d sit on her chair, right beside her, with his head in her lap.  And if my father or I even gestured at her, he growled at us.

His devotion to my mother wasn’t surprising.  She was totally devoted to him.  He became her second child.  Her son.  When he was still a baby she made him pablum.  With a small scoop of cottage cheese on the side, because he loved it.  He got to ‘taste’ everything she cooked.  My mother was a fabulous cook.  Is it any wonder he shunned his own food?

So much so, that when she’d call me and my dad to come for dinner, Tosca was the first one at the table.  He sat, on a chair, opposite the table from me.  He didn’t eat at the table, much as he wanted to.  He’d stare at us, with a sad look on his face.  Silently begging.  He’d whimper, quietly, from time to time.  Especially if roast beef was being served, because he knew there was a bone in it for him.  But he didn’t move.  He just sat there.  It was hysterical!  At least it was to us.  It might bother some people, but we were ok with it.

From time to time he misbehaved, though.  Once, when my parents had dinner guests, my mother left some pate on the kitchen table while she looked for the crackers.  When she turned around, the plate was licked clean.  Not a scrap left.  He’d obviously jumped on one of the chairs, first, and then the leap to the table was easy.  The smell of it was just too much for him.

Eventually he developed kidney problems and had to be on a special diet.  My mother took it worse then he did.  She didn’t like the food he was forced to eat, so she tried to make it as palatable for him as she could.  So she found a way to make it into patties, like hamburgers.  Don’t ask.  When he had to stay at the Vet’s for a couple of days for some tests, it took three trips from her car.

In addition to Tosca, she had his blanket, his pillow, some toys, his dishes (water and food), a mixing bowl, his fork and spoon (no, he didn’t eat with them, she used them for mixing), a spatula, a box of bread crumbs and a grill pan.  And instructions on how to cook, and serve, his patties.  He didn’t like them too hot, and they had to be cut into small pieces for him.

The look on the Vet’s face was priceless.  Too bad we didn’t have iPhones with cameras back then.  A dog’s life, indeed!

Pretty damn good, if you ask me.