I am so frustrated I could scream.  I AM screaming, actually, but you can’t hear me.  So this is as close as I can get to let you know exactly how I feel.  Can you hear me NOW?

Sorry.  Didn’t really want to deafen you for life.  I’ll try to keep it down to a dull roar from here on, in.  No doubt, you’ve got my drift, by now, anyway.  And if you’ve glanced at the drawing, and how could you avoid it, 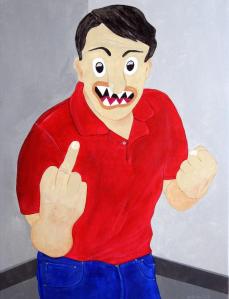 you now also know what I’d like to say to Pauline Marois, the recently-elected Premier of Quebec; and the leader of the Parti Quebecois.

She, and her merry band of zealots and language police won’t be satisfied until they have driven the final nail into the coffin of La Belle Province.

The latest is, the language cops (L’office quebecois de la langue francaise) are cracking down on small businesses in Montreal.  They are harassing restaurants, forcing them, for example, to remove ‘English’ names like ‘pasta’ from their signs and menus.

Have you ever heard of anything so preposterous?  So absolutely asinine?  So moronic?  So Saturday Night Live worthy?

One chef was told to re-write his own personal shopping list.  He’d written ‘steak’ instead of ‘bifteck’.  Another restaurateur was told to cover up the print on a hot water switch because it said “on/off”.

In their infinite wisdom (yes I am being sarcastic) the OQLF have also decided that ‘cafe’ is no longer an acceptable term to describe establishments selling coffee.  When challenged by the owner of one such ‘cafe’ he was told it had become too ‘anglified’ a word.  So it was no longer French enough.

No, I am not pulling your jambe.

They also want to determine who can go to an English school, or University, and who can’t.  Who MUST go to a French school.

Mais oui, this is what my poor family and friends of mine, who still live there,  are being forced to put up with.  Welcome to nazi Quebec.  Sorry folks.  But it’s not that different.  When self-appointed members of a community call themselves ‘police’ and give themselves the right to discriminate against others, to dictate to others, to exert force on others, to run roughshod over the rights of others, it’s a little too close for comfort, for my liking.

Quebec has essentially been in the toilet since the mid-seventies, when the idea of separatism first reared its ugly head.  That’s when the procession out of there began.  With the exception of the pharmaceutical industry, every head office of banks, insurance companies and multi-national companies re-located their headquarters to Toronto.  And they were followed by hundreds and hundreds of thousands of ordinary citizens.

Seriously.  Within twenty-four hours of Rene Levesque’s victory, money was moved to banks in Ontario and even bordering U.S. states like Vermont.  People were lined up outside their banks for blocks and blocks and blocks.  The highways were jammed with cars.

And no one’s gone back.

It was several years later that I left, and when I did, it was because I’d been offered a job, not because I necessarily wanted to.  I loved Montreal.  I have had a glorious career in Toronto and, therefore, don’t really have any regrets.  But I do get angry whenever I think I could never have had this career in Montreal.  I could have prior to separatism, but not since.  So you could say, I was driven out of my home.  My place of birth.  And those who chose to stay, for whatever their reasons, have struggled to maintain whatever few rights they’ve had left.

Please don’t misunderstand.  I have no issue with speaking French.  I learned how to speak French in school.  I still speak it, although not as ‘fluently’ as I used to, because I have no one to speak French to here, in Toronto.

Quebec should be a bilingual province.  Kids should learn how to speak both languages in school.  French people should be able to converse, at home, at school, at work and anywhere else, in the language of their choice.  So should English-speaking folks.

It’s the arrogance, even more than the stupidity, of it all that really bugs me.  The to-hell-with-you attitude.  They have contempt for anglophones.  They think they don’t need the rest of Canada.  Or anyone else, for that matter.  Because they are deluded enough to believe the whole world is waiting to come and do business with them, in French.  A language the whole world doesn’t necessarily speak.  Or want to speak.  Or have to speak.  They think they can get by on their own.

Well you know, maybe it’s time to call their bluff.   Maybe we should all just let them go.  For once and for all.    Au revoir et bonne chance!