Yesterday I made a passing reference to a film I’d seen over the weekend.  It was Saturday afternoon, we went.  And the movie was absolutely amazing.  Extraordinary, I’d go so far as to say.  “Searching For Sugar 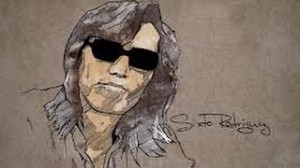 Man” is a Swedish-British documentary about an American folk musician, Sixto Rodriguez.

Have you ever heard of him?  I hadn’t until a friend of mine mentioned, at least a couple of months ago, she wanted to see the movie.  She is one of the most avid fans of music I know.  All genres.  So of course she knows who he is.  And of course, she’s been a fan of his for quite a while.  We do talk about music a fair bit, so it’s interesting we never talked about him, until now.

Before I go on, just let me say, now I’ve heard him sing and, in particular, listened to his lyrics (in most of his songs he takes a political stance on the cruelties facing the inner city poor), I am also a fan.  As I am sure you will be.   His writing is profound, to say the least.

The sixth child of immigrant parents (his dad was Mexican and his mother of mixed Native American and European descent), he was brought up in Detroit.  Where he still lives, by the way.  Despite his very humble background, he is well educated, having earned a Bachelor of Philosophy Ph.B. in 1981.

He released his first single in 1967; and in 1970, produced two more albums.  They bombed, why I don’t know.  Honestly.  Why he isn’t as well-known as Bob Dylan is a real mystery.  Anyway, he was dropped from the label, just before it folded in 1975.  At the time he was in the process of finishing a third album which, up to this point in time, has yet to be released.

And, to all intent and purposes, that was the end of Rodriguez.

Except it wasn’t.  Not really.

Because unbeknownst to him, he was a smash hit in South Africa, of all places.  Like Dylan’s music rallied the anti-war, anti-segregation forces in the U.S. of the 60’s, Rodriguez captured the hearts of South Africa’s youth, at the height of the apartheid movement in the 70’s.  There he was as famous, and beloved, as the Beatles, Neil Young and Simon & Garfunkel.

Except no one had ever seen him.

Rumour had it, he’d set himself on fire on stage.  Another had him on heroin.  Still another said he’d shot himself.  Shot his wife.  Was in prison.

In fact, he was very much alive.  In Michigan, doing manual labour, like demolitions and excavations.  Heavy duty stuff.  But it would take two industrious uber fans several years to discover the truth.

To learn Rodriguez was alive.  And that, my friends, is the journey we follow in the film.  From his early days singing at local dives, to obscurity.  From learning he never knew of his success, getting screwed out of all his royalties, to the ‘star’ treatment he received when he accepted an invitation to perform in South Africa.  To the modest man who, when he finally received money from his six concerts in South Africa, gave it all away to family and friends.

You have to see the film, if you can.  It won an Oscar this year, so chances are good it will show up where you live.  Or the DVD will.  And you must listen to his music.  You just must.

Speaking of the Oscar, I was totally pissed when he wasn’t there.  I thought he should have been invited.  But when I was doing some research for this story I learned he had been invited.  He declined because he said he wanted the film makers to bask in the limelight.  He was afraid his presence would overpower them.

You should know the film has done extraordinarily well.  It opened Sundance and won both the World Cinema Special Jury Prize and Audience Award.  It also won Best Documentary at the BAFTA Awards, the Guildbagge Award, the Audience Award at the Los Angeles Film Festival, and also in Durban and Melbourne.  It was the second place winner at Tribeca and got a Grand Jury Prize in Moscow.  And that’s just the beginning.  There’s even more.

Amazingly, Rodriguez’s voice is as strong as it ever was, so I would now love to see him perform, in person.  To feel all the emotion he writes and sings with, radiate off him, on to the audience.  I know it would be an experience never to be forgotten.  So do me a favour.  Let me know if you hear he’s performing where you live.  I’ll be there, for sure.  Hope to see you there, too.