Last weekend was my kind of weekend.  Two days, two movies.  Both documentaries.  Both about music.  Last Sunday’s film, “Greenwich Village:  Music That 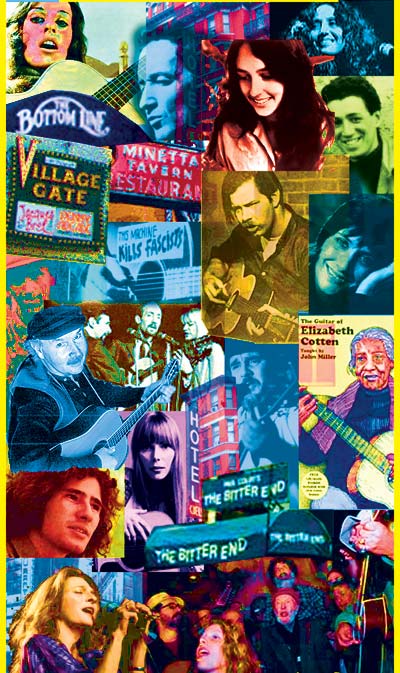 Defined a Generation”, is all about the Village in the early 60’s.  When it was a hub of creativity and social consciousness.

As a kid, as soon as I knew I wanted to work in advertising (at about 12 years old), I set my sights on moving to New York and living in Greenwich Village.  I never did, although I could have.  Guess I didn’t want to, badly enough.

Regardless, it’s a place I’ve always gravitated to, even now.  And watching the movie I know I would have loved being there.  Still would, probably.  Although, truthfully, I would have been too young to leave home then.  It was slightly before my time.

Thank God something was before my time.  Some days I feel like it was Adam and Eve and then me.

As we learn in the movie, on Sundays everyone congregated in the park at Washington Square.  That was the meeting place, where the likes of Judy Collins, Tom Paxton, Pete Seeger, Kris Kristofferson, Arlo Guthrie, Buffy St. Marie, Carly Simon and a very young Bob Dylan first sang their songs.

That is, until the city passed a noise ordinance.  Which resulted in a protest and a lot of arrests.

Which was to become a sign of the times.

The film’s narrative comes from Suze Rotolo’s (a one-time Dylan girlfriend) book, “A Freewheelin’ Time:  A Memoir Of Greenwich Village In The Sixties”, narrated by Susan Sarandon, an activist in her own right.  This is interspersed with interviews with many of the artists of ‘the day’.  One of my favourites was Jose Feliciano, who did a very funny Dylan impersonation.

There’s also enough ‘performance’ footage to make you feel like you’ve attended a concert.  The director also managed to get her hands on some great archival footage, including the protest resulting from the city’s attempt to ‘stop the music’; and silence the voices.

What’s really nice, is the knowledge that, for the most part, these performers are still alive, kicking and sharing their messages, through their music.  Even Pete Seeger, who’s now 93 years old!  In fact, many of them, were part of  Occupy New York.

I work in an extremely competitive business.  We compete with our colleagues and peers.  Agencies compete with other agencies.  And clients compete with other like companies.  So it can get pretty cut-throat.  What really struck me, while watching the film, is how the competitive nature of the music industry played second fiddle (pun intended) to the ‘purpose’ of the music and the times.  All these singers shared a ‘sensibility’, a belief.  They were not about the money.  They were about the message.  Part of which was not ‘selling out’, not becoming part of the mainstream.

We were lucky.  Laura Archibald, the director, was at our screening of the film.  So we stayed for the Q&A.  I love it when people who are involved with the film are in attendance.  It’s nice to get their perspective.  It adds a whole other dimension to the experience.

She talked about some of her challenges.  Being turned down by several artists she tried to get interviews with.  Leonard Cohen, Bob Dylan and Joni Mitchell, to name a few.  Joni Mitchell’s reasoning was a bit bizarre, though.  She refused because she said she’s retired now, so has no interest in discussing her career.

All righty, then.  Moving on …

Editing was also a bit of a challenge.  Sticking to the chronology, to be more specific.  It didn’t bother me, but it did come up in the questions.  And it is a common complaint in all the reviews I read.  Both here in Toronto and elsewhere, including The New York Times.

Like I mentioned, I didn’t have a problem with it.  I just found it a bit long, sometimes.  For my taste, it could have been a bit ‘tighter’.  But the director did also say many of the folks she interviewed were very long winded; and spoke without taking too many pauses which, again, made for problematic editing.