Must be my head’s been in the clouds for the last week or so. I have been busy with client and new client work, so I guess I haven’t been paying as much attention as 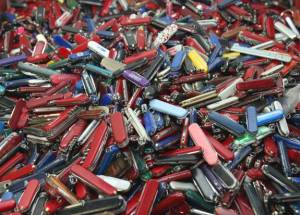 usual to what’s going on in the world.

So you can imagine how far my jaw dropped the other night, when I heard the TSA (Transport Safety Administration) in the U.S. has decided to allow travellers to carry knives onboard planes again.

Like I said, I’ve been working hard. By Tuesday night I needed a break. Had to change my head space. Honestly I was too mentally tired to read a book. It would have taken too much concentration. I was after something mindless.

Right. I turned on my TV.

Too early. Way too early.

Out of desperation I paused at Channel 33. CNN here, in Toronto. I have taken SUCH a dislike to Piers Morgan. But I had to watch something. Just for a while, to unwind. Clear my mind. So I tuned in, figuring if it was really awful, I would go to bed.

That’s where I heard about the TSA. I knew it was a bad idea to keep watching. I knew my blood pressure would start to climb. I knew I’d get all worked up. But just like those jerks who have to stop at the scene of an accident to check out the blood, guts and gore, I could not turn off the TV. No. I had to watch.

Didn’t sleep all night. Serves me right. My own damn fault.

Somebody please explain the wisdom in this decision to me. What am I missing? He (Morgan) had three guests on, debating the issue. The one who’s responsible for keeping me up is a former director (or something) of the TSA. I have blocked his name out of my consciousness, so don’t ask me. I don’t want to remember it.

Anyway, this numb nut said he thought they should also lift the ban on machetes and hatchets, as well. I swear on all that’s holy (including the newly-appointed Pope), those were his EXACT words. That’s when I knew I was in trouble. That’s when I wondered if I should take a baby Aspirin, just in case.

He insisted knives were no longer a threat to passenger or crew safety. “Our concern”, he said, “is bombs. Al Qaeda won’t hijack planes with knives. They’ll use bombs.” The fact that ALL the terrorists behind the 9/11 attacks used box cutters to get control of the planes didn’t seem to concern him at all. He fluffed it off, in fact.

The piece de resistance was when, with a completely straight face he said, and I quote: “Besides the air marshals will never allow a terrorist to use a knife on an airplane.” At which point an incredulous Morgan stuttered: “Are you telling me every plane in America will have air marshals on board from now on?” To which this moron replied, “No”.

By now, Piers Morgan’s face was the colour of an over-ripe tomato. My own head was POUNDING, so I could only imagine how he felt. I left the room temporarily to find a copy of my Will. I thought it would make life a lot easier if it was with me when they found my body the next morning, slumped on the floor, in the fetal position, with the converter clutched in my hand and my hair standing up on end.

Almost whispering at this point, Morgan asked: “Well, if the air marshals aren’t onboard, how will they stop anyone from using a knife?” It should come as no surprise to anyone the question was never answered.

Just, for a minute, imagine one mentally ill individual with a Swiss Army Knife in his or her pocket, getting on a plane. Never mind one with a machete or a hatchet. Is it not possible an innocent passenger could be killed? Or a flight attendant? Or the flight engineer. Or the co-pilot? Or even the pilot. Or a member of the ground crew? Or any other bystander who got in this individual’s way?

And don’t you think that the needless death of even one person, is one death too many?

What in God’s name are they thinking?

Of course, if the NRA get their way, eventually we’ll all be packing heat. So we’ll be able to blow the guy’s (or gal’s) brains out. The fact we could be 30,000 feet up in the air is inconsequential. Well, unless you have a problem with the idea of being blown right out of the sky.

Now see what you’ve done? I’m getting all worked up again. What ever happened to the Disney Channel?