I am going to be uncharacteristically brief in today’s post. There’s no need for me to go on and on. There’s just one point I want to make. I have to admit I love the 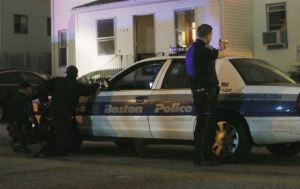 But little did I know, by last night, we’d be seeing real heroes in action. When teams representing local, state and federal law enforcement caught and captured Dzhokar Tsarmaev, one of the suspects believed to

have been responsible for the Boston bombings earlier in the week.

And I have to admit, after they’d pulled it off, and the slow procession of fire trucks and police cars and ambulances and unmarked cars made its way through the streets of Watertown and I heard the applause, and the cheering, I felt myself tearing up. It was exactly the right thing to do. And it was the absolutely perfect time to do it.

Because they are heroes in the truest sense of the word.

No, they’re heroes, make that real heroes, because every time they leave the house, they put their lives on the line, in an effort to save ours. Every single time.

It’s just not right theirs is a thankless job.

So let’s all be sure to thank them every chance we get.