Yesterday’s WordPress Daily Prompt really caught my eye.  The theme?  “Success”.  “Tell us about a time where everything you’d hoped would happen actually did.” 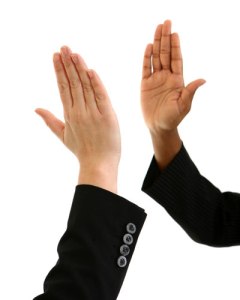 Well, I thought to myself.  This one has my name on it.

One of my earliest memories of myself is when I was about four years old.  I’d been a flower girl at my great uncle’s wedding.  My dress was ankle-length, pale pink tulle and it had tiny pink silk roses randomly tacked on the skirt every here and there.  A true fairy princess gown.  Needless to say I wanted to wear it every day.  I even wanted to sleep in it.

I loved looking at the wedding photos.  My favourite, obviously, was one of me, walking down the aisle.  It was in black and white.  I am probably the originator of  the hand-tinted photo craze.  Because much to my mother’s dismay she walked in on me one morning, colouring over the photograph.

“What are you doing, Fransi?” she yelled.  “My dress is pink”, was my answer.  Really, could you argue with that logic?

From that day, I always had crayons or pencils or pastels or a paint brush in my hand.  I went through reams and reams of paper.  My mother used to tell me, even as I got older and went to school, every text book and every note pad and work book  I had was filled with doodles.  And scribbles.  And drawings.

The only other subject I loved as much as art, was English.  And while most of the other kids hated having to write compositions, and usually waited for the very last minute to do theirs, mine were done immediately.  For me they were a labour of love.  And I never got less than an “A”.

So by the time I got to my first year of Junior High, it came to no surprise to my parents when I announced I wanted to work in advertising.  I’d been re-writing the TV commercials I’d watched for years.  Same thing with magazine ads.

What really pushed me over the edge was a visit to New York, when I was about sixteen.  My mother was born in New York, but my grandparents moved to Montreal when she was about three years old.  But my grandfather’s family stayed in the U.S.  We used to go to visit all the time.  On this occasion we were invited to a cousin of my mother’s for dinner.

Who knew both he, and his brother-in-law, worked in advertising?  Clearly the Universe was unfolding.

Before dinner, as we sat in the living room catching up on everyone’s news, my cousin asked me if I knew what I wanted to do once I was done with high school.  When I said “advertising”, his eyes almost popped out of his head.  He and his brother-in-law explained what their jobs entailed and then he disappeared into another room.

When he came back, he was holding a magazine.  Commercial Art Magazine, known simply as CA to those of us in the business.  He handed it to me and asked if I’d ever seen a copy.  I had not.

No one heard a word out of me for the rest of the night.  I had my nose buried in the magazine.  It was one of their Annual editions, where they review the best work and the best agencies.  I was already making a list of where I wanted to work.  Which clients (brands) I wanted to work on.  I became absolutely obsessed.  I could think of nothing else.

Once we got back home I begged my parents to let me subscribe, which they did.  Once a month I’d rush home from school, blow through the front door, grab the magazine off the console in the hall and disappear into my bedroom.  Only to emerge when my mother dragged me out for dinner.

Luckily my parents wholeheartedly supported my dream.  They always encouraged me to follow my heart.  They told me if I was willing to work hard for it, they’d be there with me, every step of the way.  That they’d do everything in their power to help me.

My dreams came true.  I’ve had a fabulous career in advertising.  I’ve been more successful than I ever imagined I would be.  Or even hoped to be.  Through the years I did work for most of the agencies on my list.  I also managed to do award-winning work for most of the brands.  As a copywriter, rather than as an art director, which was my first thought.  And then as a creative director.

What’s the lesson?  If we’re willing to work hard and stick with it, we can all be successful.  Whatever we hope for, can actually happen.  We just have to want it badly enough.