It took me a while to become fully conscious. I’d been in a really deep sleep. You know, what I mean, don’t you? When you wake up confused. Not sure where you 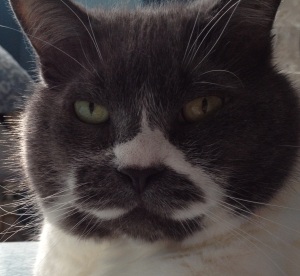 Or when you wake up drooling.

I could feel myself climbing out of my stupor. Becoming aware of my surroundings. But it was very gradual. Like slow motion.

Something was tickling my face. It was feather-light. Couldn’t figure out what it was. Because I was really still asleep. At first I just tried to brush whatever it was away. But it kept coming back. First on one cheek. Then the other. Then an eyelid. Then my nose. My forehead. My chin. It felt like a bunch of teensy tiny flies flitting

Annoying as hell, actually. Because it was starting to feel itchy, as well as tickling the hell out of me. I brushed. I flicked. I rubbed. To no avail. I tossed. I turned. I flipped. I flopped.

And then I felt something very cold on my left, upper cheek. Just under my eye. It was cold enough to make me jump. And then I realized it was cold and wet. It made me sneeze. And brush my face some more. I kept my eyes screwed shut. I didn’t want to wake up. It was such a nice sleep I was in. I was far, far, far away.

So I was really resisting waking up. It was too pleasant where I was. I don’t remember a dream. But it was peaceful and quiet and cosy and comfy. Like I was being enveloped by nice, soft, fluffy clouds. I was so comfortable. My body was being cradled by my mattress. My head and neck were being cradled by my pillow. It was in exactly the right position.

Which doesn’t happen all the time.

Suddenly I felt something quite sharp. Almost knife-like. But it was gentle at the same time. Can’t say it hurt. But it scraped along my skin a bit. Then it was gone. Then it came back. It was on one side of my face. Then the other. Then I felt something soft. So soft. And light. Like cotton balls. Like someone was caressing my face with cotton balls. Or velvet. Or cashmere. Or fur.

By then I was fully awake. Who could sleep through that? Willing myself to stay asleep was not working any more.

(groan). It was dark in my bedroom. Which really confused me. What the hell time was it, anyway? I pried my eyes open. Blinked a few times so I could acclimatize myself. Started to feel my way around my bedside table. Ahhh, there it was. My iPhone. Picked it up to see what time it was.

No wonder I was in a coma. It was the middle of the damn night. I felt something soft on my face again. I tried to focus on what it was.

Hah!! Caught red-handed. So to speak. Red-pawed. It was one of my cats, Bartlett. What I thought were flies, were his whiskers. It was his nose that was cold and wet. And when none of that worked and I was still fast asleep, he started to caress my face with his paws. First one, then the other. Up and down. From side to side. Over and over again.

His nails need to be clipped. That’s what was sharp.

The little so and so woke me up. Intentionally. He wanted some cuddles. And no sooner did I give him what he wanted, he fell asleep. I, on the other hand, was still awake hours later. Yeah. Must have finally fallen asleep once the sun came up. So tired, I slept through my alarm. Here it is almost 9:00 a.m. and I just woke up. So blame Bartlett if I’m posting late this morning.

Do not tell me that’s what I get for letting my cats sleep in my bedroom.

Really? Not me. What’s the big deal, anyway? If I’m tired later I’ll have a nap. A cat nap.