What a great night I had last night. No, I didn’t have a date with a fabulous man. I didn’t have an amazing meal at a wonderful restaurant, either. Didn’t go out 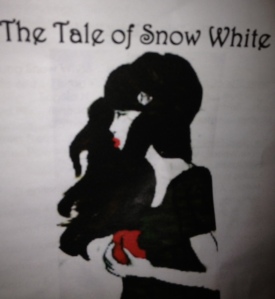 clubbing or anywhere else you’d probably expect me to be.

Believe it or not, I was at a school play.

My friend Marilyn has two little grand nephews who have to be the cutest kids you’ll ever meet. And that’s saying something, because when the maternal genes were being handed out, I must have been wearing a “Do Not Disturb” sign. “No Trespassing”. “Beware Of Dog”. “Stay Off The Grass”.

Don’t get me wrong. I like kids. I just never wanted any of my own. And, usually, after an hour with most of them, I’m ready to get back to the peace and quiet of my home.

Sorry. I’m just being honest. “Chacun son gout“, as they say. “Each to his own“, for the anglophones among you.

But these two kids. A different story, entirely. Whenever we spend time with them, I always say I’m taking them home with me. And I mean it. They are that adorable.

‘G’ is the eldest. He’s 7 and has always been a ham. Great personality. Not shy. And aside from his red hair

(which he must have inherited from Marilyn), he’s the image of his dad. He’s the one who was in the play. His FIRST play. So it goes without saying, nothing was going to keep his aunt from being there, to cheer him on. And when I was asked if I wanted to tag along, I said “Yes” immediately.

His younger brother ‘E’ is 3, almost 4. His birthday’s coming up. He’s blonde and the image of his mother. I’ve known her since she was 2, and honest to God, if you put her photo when she was his age, next to his photo now, you’d be hard pressed to tell the difference. He’s a total imp and you just want to squeeze him until he squeals. At least I do.

No, I won’t tell you how old she is now.

One of the things that really struck me, as we sat in the school auditorium waiting for them to start, was how so many of the moms were involved. Marilyn’s niece, for example, worked on the costumes, the props and the set. As did other moms. They helped with hair and make-up. They helped the kids get dressed in their costumes. Whatever was needed.

Not easy, when you’ve got other children, jobs, husbands and homes to take care of. Which is the other thing that struck me. How involved dads are today, with all this stuff. They really pull their weight, whether it’s taking care of the kids or helping with cleaning and cooking, or coaching hockey and soccer and whatever other sports their kids are into.

So while “G” and his mom were busy with all the last minute rehearsals and preparations for the performance, dad picked “E” up from school and organized dinner for all of us. Then he chauffeured us to school (and drove each of us home, afterwords, too).

But this post isn’t really about today’s marriages. It’s about a group of students, from grades 2 through 8, who wowed the audience. This was not a simple, little play. There were a lot of characters and a huge amount of scene changes. And set changes. It lasted about an hour and a half. And except for a few of the youngest, they all had a fair amount of dialogue to learn. And remember. They also had to learn their cues. When to come on stage. When to exit. What to do when they were there. It’s a lot. Especially for the wee ones. It was a very ambitious undertaking.

And remember, all of this learning and practicing and rehearsing was done while they were in school, with homework to do and all those extra curricular activities kids have now.

Pretty impressive, if you ask me.

Last night was the first performance. There’s a second one tonight. There was the odd glitch here and there. The odd delay. The odd forgotten line and move. But they were fantastic! All of them. They put tons of effort into it, you could see that. If they were nervous it didn’t show at all. They all looked like they were having fun up there. Cute, cute, cute!! Each and every one. And “G”?

Are you kidding? He was amazing. Seriously. No, I’m not biased. If you’d been there I know you’d be saying the same thing. He didn’t just recite his lines. He acted. Emoted. Performed. He was expressive. He knew his lines perfectly. He strode on to that stage with complete confidence. And he had a blast.