A blogging friend had an interesting post on her Facebook timeline yesterday.  You type in several paragraphs of something you’ve written.  It can be a blog, a 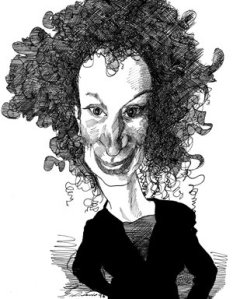 letter, a book, it doesn’t matter.  An “analyzer” then compares your word choices and writing style to those of famous writers.  Then it tells you who you most write like.  In fact, that’s what it’s called:  “I Write Like“.

Rather than going through tons of documents, I used the first few paragraphs of my blog post from yesterday.  Lo and behold, who did it tell me I write like?  Whose style is similar to mine?  Let me rephrase that.  I doubt she’d like to know she writes like me.

Whose style does my style most resemble?  At least as far as “I Write Like” is concerned.

None other than one of the most-honoured authors of fiction in recent history.  Margaret Atwood.  A Canadian poet, novelist, literary critic, essayist and environmental activist.  Drawing a blank?  “The Handmaid’s Tale”.  “Cat’s Eye”.  “The Blind Assassin”, to name a few of her books.

If it’s not enough that she’s won the Arthur C. Clarke Award, the Prince of Asturias award for Literature, has been shortlisted for the Booker Prize five times (won once) and has been a finalist for the Governor General’s Award several END_OF_DOCUMENT_TOKEN_TO_BE_REPLACED