Actually, just looking at this photo and imagining myself in it makes me happy.  So beautiful and serene.  But what inspired this 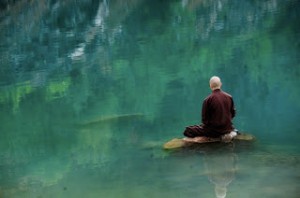 It’s about Matthieu Ricard, a 69-year-old monk who’s being called “the world’s happiest man;” and here’s the link if you want to read it.

He believes that when you think happy thoughts, for even 15 minutes a day, you’ll start getting positive results in just two weeks.

In case you think it’s hogwash, he participated in a 12-year study on meditation and compassion, led by a neuroscientist, and they discovered that “when he meditated on compassion his mind was unusually light; and it produced a level of gamma waves never reported before in the neuroscience literature.”

Still not convinced?  Years ago I took a six-week course on guided meditation.  Our teacher had participated in a small research study at a leading cancer hospital in Toronto, Princess Margaret.  They wanted to know if meditation would improve the quality of life for palliative care patients.  Although he only worked with six patients, the results were outstanding.

All but a couple significantly out-lived the time frame they were given.  All felt less pain and discomfort, all were happier and calmer and all experienced peaceful deaths.

As far as I’m concerned it doesn’t get much better than that.

These days it’s so easy to get drawn into all the negativity around us.  And I am convinced it has an affect on our ‘being’; and on our lives.  I know that when I was all caught up in the presidential race, and was glued to the TV watching the debates and listening to the pundits I felt lousy.  I couldn’t find anything to feel excited about, I was frustrated, shocked, dismayed, disappointed and honestly, it sapped my energy.  I was drained. Ridiculous I know, but that’s what negative energy does.

When I distanced myself I felt the difference immediately.  I was back to my positive, upbeat self and I suddenly have energy to burn.  I feel like I’ve been on a long vacation.  I’m refreshed — mentally, physically, emotionally and even spiritually.

At the same time that I ‘changed the channel’ and concentrated on thinking happy thoughts a lot of terrific opportunities started coming my way.  Literally out of the blue.  Seriously.  Even in January when mercury was in retrograde.  You can’t argue with that.

32 thoughts on “The happiness effect …”