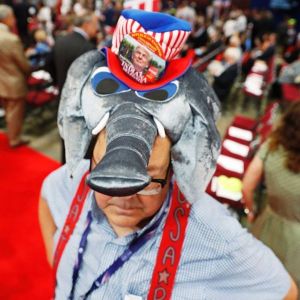 on me? Am I missing something? Am I just an old stick-in-the-mud? Or is the carnival-like atmosphere of the GOP convention also making you wonder how the US ever became a super power?

I know the Democrats do it too, although from what I watched on TV last night it didn’t seem as bad. I know it’s the way it’s always been done. And while I admit it’s always given me pause, I’ve usually just shrugged my shoulders and moved on.

But this year, when so much is at stake, when the country has never been more divided, when nobody’s life seems to matter, when you never know where or when or how terrorists are going to strike but you know for sure they will, when the economy globally is static or worse, when jobs are scarce, when the poor are poorer, when the world has never been more out of control and sanity is in very short supply I have to say I find all the over-the-top frivolity offensive.

Do these folks really have to wear stupid hats? Must they jitterbug in the aisles? Must they hoot and holler like a bunch of drunks on New Year’s Eve? Must they behave like a roomful of out-of-control six year olds at Chucky Cheese?

Electing a president, and being the president, is serious business; and never has it been more so. I’ll spare you the details, we’re drowning in them as it is. They’re unavoidable, unless you live in a cave. But suffice to say, I think everyone involved needs to take a time-out.

What do I know? I’m a Canadian and I’m the first to agree there’s a lot about US politics I know nothing about.