A friend and I were talking about New York the other day. I’ve been there hundreds of times 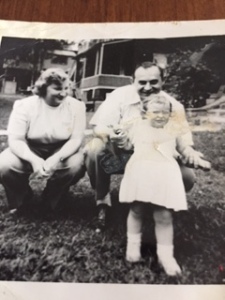 over the course of my lifetime, but I had an instant flashback to one trip, in particular.

I was with my parents, my aunt and cousin. I was young, not yet a teenager. But not as young as I am in the photo with my parents. I was probably a year old, two at the most in this shot.

My parents and I used to go to New York every spring, for easter, for about a week or 10 days. My father went often for business, but as a family we went once a year, although occasionally more often. My mother was born there and my grandfather was the only one of his siblings who ended up settling in Montreal. All his brothers and sisters stayed in New York, so our visits were a combination of business for my father, fun and visiting family. I loved New York, so I was as happy as a clam with this arrangement. For my part, we could have stayed forever.

We always drove. My mother didn’t like flying if she didn’t have to and my father loved the drive (why I do not know). He didn’t have many quirks, but getting up in the middle of the night and leaving at around 3:30 in the morning was one of them. In his own words, “I like to beat the traffic.”

All righty then. Beat the traffic we did, even though I grumbled at being woken up so early.

Another of his quirks was that he preferred to stop along the way as infrequently as possible — essentially only to fill the car with gas. God help you if your bladder and the gas tank were not in sync.

This meant that my mother packed a picnic — and what a feast it was — not that we stopped and looked for a grassy knoll from which we could enjoy it. Put all thoughts of a blanket spread on the ground, under the shade of an old oak tree out of your mind. We ate on the go.

If this sounds awful and you’re thinking my father was a miserable tyrant, nothing could be further from the truth. We all loved this annual expedition, bizarre as it was, and my father was no tyrant. He was a wonderful, compassionate, generous guy and an amazing husband and father.

Back to this particular trip.

We pulled up to the hotel at around 9:30 in the morning. See — my father was right. There was a benefit to leaving early and learning how to pee on demand. The bellhops loaded our luggage on the trolley, we made our way inside and my father sidled up to the front desk.

From our vantage point on a nearby sofa it didn’t take long before we saw my father’s body tense; and we also saw him reach for his wallet and remove a piece of paper — which he waved under the desk clerk’s nose. “Uh oh,” said my mother. That just about summed it up. Uh oh. My aunt gave my mother one of those head nods that says, “maybe you should go see what’s wrong, Roz.”

Off she trotted, to join my dad, just in time to hear him say, “Find us rooms or all five of us will spend the next week sleeping in your lobby.” They’d screwed up our reservation and didn’t seem to care that my father had a confirmation.

They had no rooms for us. They were fully booked. So sad, too bad. “Not moving,” my father’s body language said. The day manager was summoned.

After shuffling through papers, pacing back and forth, some hemming, hawing, throat clearing and a couple of phone calls he said: “Well Mr. Weinstein, I have some good news for you. We do have one accommodation, a suite, you can stay there.”

As it turned out the suite belonged to Jackie Gleason, who lived in the hotel but was obviously out of town. For those of you who are too young to know who I’m talking about he was an actor, comedian and musician. He is probably best known for a TV show he starred in, called The Honeymooners.

The suite was a huge seven-room duplex penthouse with a fully-equipped kitchen any chef would kill for, an enormous living room that was large enough for, among many other pieces of furniture a black baby grand Steinway, a formal dining room that sat 14, more bedrooms than we needed and a spiral staircase that took you to the master bedroom.

Every wall was papered in leopard-skin print, the sofas and chairs were upholstered in black leather and all the carpet was red. Yeah, not the place to hang out in if you were suffering from a hangover. But absolutely spectacular, in a Las Vegas kind of way.

And it was ours for the next week. Needless to say, my grandfather’s brothers, sisters and their spouses and kids were invited to our place for brunch the next day. I can still see the looks on their faces when they walked through the door.

Sure beat sleeping in the lobby.