Have you ever wondered what you’d be doing if you’d chosen a different path? I never have in the past, but 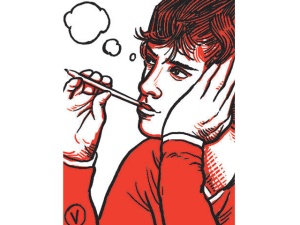 I do think about it occasionally now.

For me it was easy. I was about 12 years old when I decided I wanted to work in advertising. Originally I wanted to be an art director and I did go to art school after high school. My mother wasn’t surprised because she used to say I was always doodling, that I didn’t have a notebook or school book that didn’t have sketches in it.

When I graduated from art school my first interview was with the creative director of a large Canadian agency, McKim. I’ll never forget him, because even though he’d told me when I called that he had no jobs available he was still willing to meet; and he spent more than an hour with me. He went through every single page of my portfolio, talking to me about each piece.

At the end of the interview, he asked me who’d written all the copy. When I told him I had, he asked if I’d ever considered becoming a copywriter. I hadn’t. He suggested I give it some thought. I didn’t have the presence of mind to ask why, so I’ll never know if he thought my art direction skills left a lot to be desired  or if he thought there’d be more opportunities for me, as a writer. Years later I discovered that, at that time, there was only one female art director in Montreal and she only worked on detergents and feminine hygiene products.

Don’t get me started on that.

To make a long story short, that night I discussed the interview with my parents. I remember my dad asking me if I was disappointed. I wasn’t, actually and decided that I’d take the advice seriously. The next day I had another interview, and when the creative director asked what I wanted to do, I said “copywriter.”

He hired me, although not as a writer. I was a “go-fer” in the creative department. You know, “go for coffee, go for lunch, go for my laundry, etc.” But I didn’t care, I was thrilled to bits. I had a job, in an ad agency, in a creative department. And from time to time they let me write something or letraset a headline. And it was there I got my first taste of glory.

They were working on a big assignment for one of their clients, Penmans. They were introducing a revolutionary design of women’s hosiery — nylon stockings without a reinforced heel.

What really made them revolutionary, was the fact that they were as strong as those with a reinforced heel (so you could wear them all day, and into the night, without risking a run in them). And obviously they were perfect for wearing sling-back shoes, which were becoming the rage.

One of the art directors working on the campaign had asked me to get him some breakfast. When I walked into his office the walls were covered with concepts (no computers back then, we still used paper) for outdoor billboards.

After handing him his bagel and coffee I stood in the middle of his office staring at the walls. “What do you think?” he asked. If nothing else, I was the target audience.

Having balls even way back then, without hesitation I said something to the effect of “they’re not working for me.” Those aren’t the exact words, but you get the gist. “Well, he said,” slightly miffed, “do you have a better idea?”

Immediately I said: “The go-go stockings with the gone-gone heel.” Those were the days of discos and go-go dancers. And, of course, they were also meant for women on the go.

To be honest, I don’t know where I pulled that out from. But he just stared at me with his mouth hanging open and then he started to laugh — an out-of-the-mouths-of-babes type of laugh.

“Tell you what,” he said. “I’m going to work that up and take it into the presentation. I can’t say it’s yours but I promise if the client buys it I’ll get you a printed sample.” I was a mere baby, it was my first job, but even then I knew he’d be taking credit for someone else’s work and that was not cool.

Out of all the ideas presented, that was the one the client liked. The asshole never got me the sample.

Needless to say, despite that experience, I never regretted my decision to work in advertising. Still don’t, but I do wonder, from time to time, what would have happened if I’d opened door number two or three, instead of door number one. Investigative journalist, foreign correspondent, story editor, and book store or beachside cafe owner come to mind.

Maybe in my next life. What about you?