This past Sunday I decided, on the spur of the moment, to visit The Danforth, otherwise known as 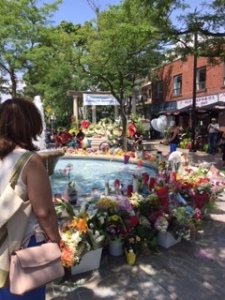 Greektown in Toronto. It was warm and sunny, glorious really, the kind of day that always attracts locals, visitors from throughout the GTA (Greater Toronto Area) and tourists to the Danforth in droves. Not surprising with its abundance of boutiques and family-friendly restaurants and cafes — most with terraces and patios.

But of course, this wasn’t just another summer Sunday on The Danforth. One week earlier, on a beautiful summer night, this lovely, lively, friendly, family-oriented, safe, beloved neighbourhood was the scene of a horrific crime.

As seniors and twenty-somethings and students on summer break and parents with children talked and laughed and ate and sipped and licked dripping ice cream cones, shots suddenly rang out. And before you could figure out what, exactly, was going on, a mentally ill man with a gun had shot and wounded 13 people (some critically) and killed two — an 18-year-old young woman who was looking forward to starting nursing school in the fall and a 10-year-old girl whose life hadn’t even really yet begun.

All too common south of the border and in other parts of the world. But not in Canada. Not in Toronto. And certainly not on The Danforth.

So there I was on Sunday morning. I awoke to a cloudless blue sky. I was on a mission, after breakfast, to return some vitamins I’d bought the day before which, once I’d come back home and checked, were not what I usually take. Except I was no further ahead because the vitamin shop didn’t have them.

And that’s when I decided to go to The Danforth. There’s a really large, employee-owned, natural food market there — The Big Carrot — and they have a dispensary that probably has one of the largest selections of vitamins I’ve ever seen.

In truth, I could most likely have found the vitamins in any one of a number of shops. They’re not that uncommon a brand. But I decided I wanted to support The Danforth. When I first got there, at about 1:30 p.m., the streets were uncharacteristically quiet; and my first thought was, “Gee, I hope people aren’t afraid to come here now, because of the shooting.” But as I walked I could see that most of the tables on the patios I was passing were occupied.

Surprisingly, I struck out again with the vitamins. But by then I was famished. So I decided to stop at one of my favourite Greek restaurants, Christina’s, for some lunch. The place was packed — at least outside on the terraces; and it was such a gorgeous day I can’t imagine anyone wanted to sit inside, anywhere.

But first I stopped at the memorial for the victims that’s been set up, in the small park, very close to the restaurant. It, too, was packed with people — some just sitting, some looking at all the cards and signs and candles and teddy bears and flowers that have been left (some can be seen in the photo I took), some just staring at nothing, lost in their own thoughts, while a few were being interviewed by a TV crew who, a week later, still wanted to get reactions to the tragedy.

It made it real for me and yet, at the same time, I just looked at the scene in disbelief. Much the same as it was for most, if not all of the people there, I’m guessing. Shocking, incomprehensible and sad. And then I walked the few steps to the restaurant.

By the time I’d finished the first part of my meal, the salad, the streets were filled with people. It was like I blinked and they appeared out of nowhere. I had the feeling that a lot of people were there for the same reason I was, to support the neighbourhood. And, in the crowd, there were also locals who live there — at least that’s what I concluded — because as they walked and saw people they knew, they stopped and hugged each other and spent some time together before moving on.

Sadly, they’re more than just neighbours or members of the same community now, they’ve shared a life-changing experience; and for them, nothing will ever be quite the same again. What I realized as I was leaving, though, is that The Danforth is one of those places that belongs to everyone. You can’t say that about every community in every city, but you can say it about The Danforth.

My visit was unplanned, but I’m very glad I went.