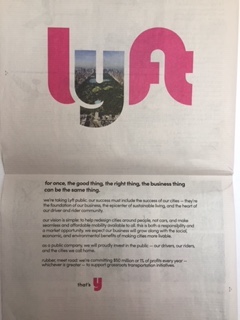 I’ve spent my entire career in advertising, as a writer and creative director. So if anyone can’t stand ads that are all bumpf and advertisers who talk to themselves it’s me. But in the case of this particular ad, which appeared on the back page of the Business Section in last Sunday’s New York Times (following lyft’s IPO last Friday), it’s even worse than that.

After resisting ride-hailing companies, which is what lyft, Uber and some others are, I finally caved in. My friends convinced me that because they have so many drivers, you rarely have to wait for more than a minute for a car and they’re the ultimate in convenience. Because you provide your credit card or PayPal account when you download the app, you never have to fumble in your wallet for cash. You’re automatically billed after the ride.

My first few experiences were terrific and I quickly became a convert. Then I started having problems with drivers going to the wrong addresses to pick me up. It happened once. It happened twice. It happened three times. It got to the point where it was happening more often than not. And to make matters worse, the customer gets billed for being a “no-show.”

Yes. The customer is penalized because the driver goes to the wrong place.

Fighting these charges is a pain in the you-know-what for a few reasons. You can’t just call, there’s no published phone number. There’s no specific customer complaint email address either. You have to go into your ride history, find the transaction and dispute it after the fact. Then there’s a series of back and forth text messages between you and a bot.

A few weeks ago when again, the driver was MIA I have to admit I was more than a bit testy when he finally showed up. But he proved to me that he wasn’t at fault — that it was lyft’s technology. He showed me, on his phone, that the directions he was given were incorrect. He spent the entire ride complaining about it and also told me the drivers have complained to lyft, who have refused to upgrade their technology. I’m sure the drivers are angry and fed up — it’s understandable — they’re the ones who have to deal with the wrath of the customers. It’s the drivers who don’t get tipped as a result. And it’s the drivers who suffer when lyft loses customers.

Truthfully, I felt bad for him and gave him an extra large tip. But I sent a long text to lyft complaining about their technology, explaining that a driver had proven to me that the problem was a lyft problem, not a driver problem.

Ask me if I ever heard anything back.

But, being a glutton for punishment, I used them again last Friday. And, yet again, the driver went to the wrong place and never showed up. But he did call me and scream, on the top of his lungs, that I wasn’t where I was supposed to be.

Of course, I was charged with the “no-show” fee. And yeah, of course, I snapped.

This time I’ve deleted their app.

Wanna know why the ad got me so riled up? Read this copy and let me know what you think:

for once, the good thing, the right thing, the business thing can be the same thing.

we’re taking Lyft public. our success must include the success of our cities — they’re the foundation of our business, the epicenter of sustainable living, and the heart of our driver and rider community.

our vision is simple: to help redesign cities around people, not cars, and make seamless and affordable mobility available to all. this is both a responsibility and a market opportunity. we expect our business will grow along with the social, economic, and environmental benefits of making cities more livable.

as a public company, we will proudly invest in the public — our drivers, our riders, and the cities we call home.

Give me a break. This copy would make me hurl even if I hadn’t had so many bad customer experiences. And don’t even get me started on the lack of capital letters at the beginning of the sentences. I know it’s a play on the fact that they don’t capitalize the “l” in their logo — lyft. Which begs the question why, then, is it capitalized when it’s used in the copy? Never mind.

And just on the off chance that someone from lyft is reading my blog, perhaps it would be smarter to invest at least some of that $40 million on technology that works — you know — so you can pick customers up where they happen to be, and you can take them to where they want to go.

14 thoughts on “What an absolute crock …”