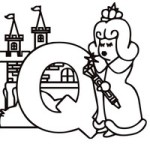 I’ll bet there are a lot of you, who’ve been saying to yourselves, “Just wait ’til she gets to the letter “Q”. This whole alphabet thing’s going

to go up in a puff of smoke. To hell in a hand basket.” Well, guess what?

What better topic could there be, but my home province? Quebec. Yep, on second thought, let’s make that ‘oui’. I am a born and bred Montrealer (slightly to the right of Ottawa on the map, in case you’re trying to find it). A Montrealaise. A Quebecois.

And quite frankly, if it hadn’t been for all the political nonsense that’s plagued both the city of Montreal and the Province of Quebec since the late Rene Levesque first came into power in the 70’s, I’m not so sure I’d be living in Toronto.

To cut to the chase, there is a very large group of idealistic (and quite militant, not to mention extremely emotional) French Canadians who want nothing to do with the Queen. They are totally anti-monarchy. More to the point, they