Here it is, almost Christmas and she’s pissed at me.  I thought this was the season to be jolly!  You know, HO! HO! HO!  Fa la la 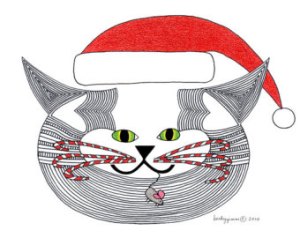 la la and all that jazz!

Harumph!  All she is, is grumpy!  No Christmas spirit what so ever!

She knows I need a lot of attention.  All that bull about cats being uppity and independent is just that:  BULL!!  This isn’t her first rodeo.  She’s had plenty of cats.  She knows the score.  She KNOWS what we’re like.

So I want to be petted.  So I want to be hugged.  So I want to cuddle.  So I want her to whisper sweet nothings in my ear and tell me she loves me.  So I sit on her head when she’s trying to sleep.  So I lay on her chest when she wants to get out of bed.  So I follow her everywhere she goes.  So I run in and out of her legs and make her trip.

So I pace back and forth on her computer when she’s trying to work.  So I keep swatting her with my paw.  So I keep head butting her.  So I stick my nose on her face.  So I tickle her with my whiskers.  So I bite her finger when she deliberately ignores me.  So I start acting up.  So I charge around the house, bumping into furniture.  So, in my haste, I knock the odd tchotchke off a table.  So I resort to caterwauling (like I did at 2:00 a.m. Saturday morning).  A cat’s gotta do what a cat’s gotta do.

So I don’t want to wait until she takes her coat off before she shows me some love.  I’ve been sitting around, waiting for hours, for Heaven sake.  With no one for company, other than Bartlett, that pain in the ass.  He’s the real affection hog around here.  Don’t get me started on HIM!!!  Cretin!  Cry baby!! Spoiled brat!!! Mama’s boy!!!!  Wuss!!!!!

But last weekend, that was the worst.  I barfed.  A couple of times.  What’s the big deal?  Everybody barfs, even her.  It happens. Get over it.

Next time it was that god awful food she feeds us.  It’s dry food, which I must say I prefer.  Wet food smells and if you don’t eat it all immediately it looks gross.  But this stuff has huge, hard ‘kernels’.  We’re not horses, you know, just little house cats.  With delicate digestive systems.  I think we’re getting too old for it — oh come on, have some heart, will ‘ya?  Everyone knows your stomach becomes more sensitive as you get older.  It’ll happen to you, too, you know — if it already hasn’t.  So stop with the tsk-tsking.

Don’t be so judgemental.

I hear her on the phone with the vet.  She says it makes us vomit.  He says it’s good for our teeth.  It may be.  But I’m telling you, it’s making us up-chuck.

And then when we barf she gets all hot and bothered.  Well, let me clarify:  When I barf all over the furniture.  You know, the velvet sofa or the slip-covered dining room chairs or the duvet on her bed.  Or on her pillow, which really sets her off.

“Mutter, mutter, mutter”  under her breath.   Swear words GALORE!!  Such language!!!  My poor ears.  She’d made a longshoreman blush, let me tell you.  Although to be fair, she does always ask why I can’t vomit on the floor, where it’s easy to clean the mess up.  I suppose that’s not entirely unreasonable.  But, for some reason, I just can’t seem to help myself.

Do you think it could be my misguided way of making sure I get attention?  Well I must be a ‘masochat” because it sure doesn’t get me the kind of attention I crave.  The loving kind.  Nooooooooo sireeeeee!  Anything but.

Anyway, I think I pressed one too many of her buttons this time.  The middle-of-the-night screeching may have done it.  She hasn’t been sleeping well.  Didn’t sleep through the night a single night last week.  Not one.

Man, did she yell!

Do I have to describe her reaction when I did it again an hour later?

No, I won’t tell you where I hid, just in case she reads this.  She’s sneaky that way.  Very nosy.  And we all know I’ll be needing a hiding place very, very soon again; and there’s only so many nooks and crannies available in this damn apartment.

In the meantime, though, I wouldn’t mind if you put in a good word for me.  It being gift-giving season and all.  Really, I’m a good boy.  My heart’s in the right place.  If only she’d devote herself to me 24/7 — like cat owners are supposed to do — everything would be hunky dory.

It’s not my fault she doesn’t understand the rules.