It’s easy to figure everyone else out.  Their strengths.  Their weaknesses.  Their ‘issues’.  Their baggage.  Well, let me qualify that.  It’s easy if you’re somewhat intuitive, you pay attention and you care.  And if you’re willing to pull 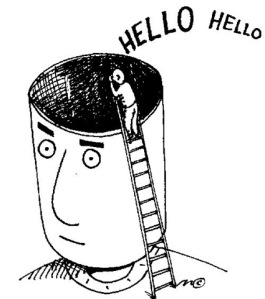 yourself away from your most favourite subject (yourself), long enough to see what’s really going on, with the people around you.

But have you got yourself figured out?  That’s not quite so easy, is it?

Again, it could be if you wanted to.  So.  Do you?  Or don’t you?  Do you really not know?  Or don’t you want to know?  Because there is a pretty substantial difference between the two.  Who, then are you?  Which camp are you in?

With those who are very good at ignoring even the obvious?  Like ostriches, they bury their heads in the sand.  And won’t even try.  Or with those who scamper away every time they get close to discovering the truth about themselves? Too scared or too uncomfortable to go any further.

Or with those who don’t let themselves get away with anything.  They delve and confront themselves at every opportunity.  Keep themselves honest.  Do the work, when there’s work that needs doing.  Or at least acknowledge that some tinkering is needed; and either put it on a to-do list or knowingly walk away from it.  ‘Knowingly’ being the operative word here.

Wondering where I’m going with this?

Well to start, I’ll tell you where I fit in.  Unless you already think you know.  Do you?  Wouldn’t it be cool if you could respond right now, and then I could tell you if you were right or wrong?  But alas, as it is with technology at this point, we can’t do that.  At least, I don’t think so.  So the question is merely rhetorical.  And I’m about to tell you, whether you want to know, or not.

I fall into the last camp.  At least 95% of the time.  Not because I’m such a genius.  Or so enlightened.  Or a student of Freud.  It’s much simpler and more basic than that.  I like people.  I am curious about them.  I love to figure out what makes them tick.  I also care about them.  If they’re in pain, I want to know why.  So I can help, if I can.  Same if they’re sad, or lonely, or miserable or ill.  It’s in my nature.  See.  I know that about myself.

Sometimes, to their great annoyance, I’m like a dog with a bone about it.  See.  That’s something else I know about myself.  I am very conscious of this trait.  Or flaw, depending on how you look at it.  Personally, I think it’s a bit of both.  Anyway, I know I do it.  I know I can stop it.  And that’s exactly what I try to do, when I realize that my good intentions are beginning to have the opposite effect.  And a lot of the time, I succeed.  Not all, but.

Which is what self awareness is all about.  That’s where I’m going with this.

Not from the insecurities.  Because we all have them.  Everyone’s may be different, but we’ve all got them.  Sometimes, when I’m in a room with very smart people, and I do mean ‘very’, I think twice before opening my mouth.  I look around and I’m intimidated by the intelligence in the room; and I don’t think I stack up.  So I don’t say much.  I clam up.  And the terribly shy little nine year old who’s buried deep, deep, deep inside of me, pays me a visit.

Like I said, it doesn’t happen all the time.  But when it does, it’s because I’m feeling insecure.  Whether it’s justified or not, is another story.  But it’s still an insecurity.  And I’m aware of it.  And I do my best to deal with it.

And I am convinced that because I acknowledge it, and own it, and try to work through it and have, therefore, taken control of it, it makes me strong.  Not weak.  It empowers me.  It lets me prepare myself, for the next time I’m in a similar situation.  It lets me talk myself off the ledge, long before I get to the ledge.  So it happens less and less.  Because I am aware enough, to try to prevent it.

Which builds my confidence.  So I am grateful that I’m like a dog with a bone, sometimes.  That I examine why I do things.  And don’t do things.  And behave a certain way.  Or not.  And never, ever lie to myself.  I really do know myself better than anyone else ever will.  And that’s okay with me.