It comes with the territory.  If you’re going to put yourself, your work out there, not everyone’s going to love it.  Not all the time.  It’s bound to happen, so the sooner we learn how to 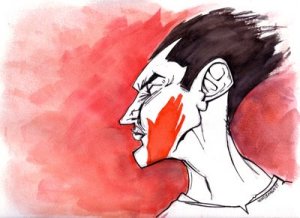 deal with it, the better.

There.  I’ve said it.  And having suffered it, many times, I’ve got to tell you it’s not as horrible as you might think.  The pain is fleeting.  Really, it is.  And it leaves no lasting scars.  At least I don’t have any.

Maybe my skin is thicker than most.  In advertising, people don’t mince words.  There’s too much at stake.  And far too little time.

In my business there are dozens of people who get the chance to dump all over your work.  And trust me, they do. Not to be purposely hurtful.  Not to be nasty.  Not because they can.  Not most of the time, anyway.  Sure, there’s
always an S.O.B. in the crowd, but they’re really in the minority.

They (the good guys) do it because you may have missed important points.  Or because something you’ve written is factually incorrect.  Or because the ‘tone’ is wrong.  And because we get paid to get it right.

Sometimes, it’s because they just don’t like it.  Let’s face it.  The ‘approval’ process is subjective.  Much as we’d like to think we’re being objective, we’re not.  Not totally.  Our initial reactions are usually ‘personal’.  Real pros can then go back and assess based on a pre-agreed-upon brief, or certain criteria.  But our first impressions always count for part of the final ‘score’.

And the truth is, some people will like what you’ve done.  Some will love it.  Some will be completely ambivalent.  And some will hate it.

Which is exactly the way we are, when we’re looking at the work of others.  Whether it’s writing, painting, illustration or photography.  Whether it’s a play, a movie or a television show.

Do you like everything you read or see?  I sure don’t.  I’ve walked out of movies before they’re over.  I’ve stopped reading books after the first couple of chapters.  I’ve seen paintings I’d never, in a million years, want hanging on my walls.  I’ve gone to exhibits and wondered, “How’d he ever get this famous?”

So why should I assume everyone will like everything of mine.  Or should.  We’re all entitled to our own opinions.

Our fear of rejection stops a lot of us from even trying, in the first place.  And I find that a shame.  I do get it.  We put so much into everything we do.  So much of ourselves.  So it’s hard not to feel like you’ve been slapped.  But trust me, we haven’t.  And good can, and usually does, come of it.  Like most temporary set-backs or ‘defeats’, there are lessons to be learned.  In the end, it just makes us stronger. And better.  Our work gets better.   Which is the objective.  Correct?

In the very early days of writing my book, a friend suggested I get the opinion of a former publisher he knows.  I only had a couple of chapters written, but he felt it would be good learning for me.  I was shaking as I sent it off.  As it turned out, he really liked it; and gave me some very valuable suggestions.

He also said he’d like to send it to a literary agent he knew.  An important agent, in Toronto.  It was beyond my wildest dreams.  I was beside myself.  She rejected it, without even seeing it.  She wasn’t interested in the ‘topic’.  I forced myself not to take it personally.  And I forced myself to keep writing.  I also re-examined my motives.  Why I wanted to write this story.  I looked at it, as an opportunity to make sure I was really committed to the idea; and that it had merit.

Several more chapters into it,  I met a woman at a pilates class I was taking once a week.  We were both there early one day, and started talking.  She asked what I did and I told her.  She said she’d been a small press book publisher, before she retired.

“Divine intervention”, I thought.  When I told her I was writing a book, and what it was about, she referred me to a publisher friend.  Rejection Number 2.  She was ‘into’ women’s issues; and while one could argue my book definitely touched on issues affecting women, it wasn’t nearly enough for her.  Too much on the periphery.

For a moment, I despaired.  I’m human, after all.  And just as quickly I got over it.  No one had said the book was lousy.  Simply wasn’t ‘right’ for them.  My mother used to have this expression:  “For every pot there is a cover”.  I believe there is an agent out there, who will love my story.  We just haven’t connected yet.  After my first two experiences I decided to concentrate on finishing my book before looking any further.

I also believe there’s a publisher for me out there, as well.  If not, I’ll self publish.  In fact, I may do it regardless.

That’s how determined I am.

Because I believe in my book.  I believe the story will resonate with the hundreds and hundreds of thousands of men and women who already have, currently are, or will, experience what I did.  And reading about what I’ve gone through, and how I dealt with it, may help and inspire them.

Now you know how I deal with rejection.  I accept it.  I learn from it.  I move on.